It may have been a while since you last thought of or considered the developments of the Real ID Act and what that might entail for either yourself or your U.S. employee population, especially those that travel by air.

Starting October 1, 2020, every state and territory resident will need to present a REAL ID compliant license/ID, or another acceptable form of identification, for accessing Federal facilities, entering nuclear power plants, and boarding commercial aircrafts. The card itself must be REAL ID compliant unless the resident is using an alternative acceptable document such as a passport.

Previously, we were very concerned for situations where states were not compliant with the Real ID standards. In other words, these states did not issue licenses meeting the requirements of Real ID. In this situation, travelers had to plan for the prospect of utilizing other forms of acceptable ID to board a commercial aircraft, such as a U.S. passport.

Fortunately, looking at the map below it appears that all states are either compliant or under an extension to become compliant. Any extensions already granted means that state is making progress toward becoming compliant.

That said, any states under an extension but not actually compliant yet still need to be watched closely in order to confirm that travelers can board U.S. flights with a state license as of October 1, 2020.

Remember, too, just because a state is compliant does not mean that an individual possesses one of the compliant issued licenses. As some of these states only recently started issuing Real ID-compliant licenses, individuals will need to obtain the new licenses from their state transportation body and replace their older licenses.

To find out more information about your state’s status with the REAL ID Act, Homeland Security in conjunction with your state’s transportation department (e.g., DMV). 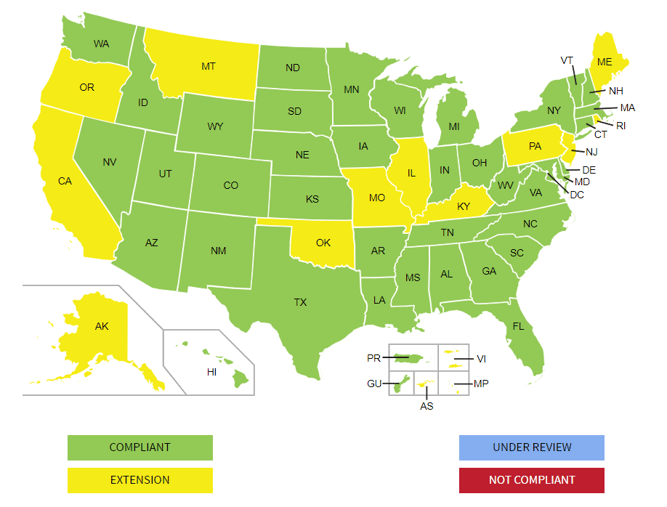