As anyone who has completed an international assignment will tell you, each country has cultural differences and norms that can make expatriate life challenging. In this continuing series spotlighting country cultural differences, we will examine some of the aspects of culture in Thailand, a common location for international assignments. Below, our long-time trusted partner, IOR Global Services, provides important information for successful cultural integration.

Despite the hierarchy, Thailand is one of the most welcoming countries to transgender people, and greater equality is being achieved for the LGBTQ community. While Thailand is largely ethically and religiously homogenous, with more than 90% reporting as Thai and Buddhist, there are smaller minority ethnic and religious groups, including “hill tribes” and Malay Muslims. Many large businesses are also owned by ethnic Chinese Thai citizens.

Emotionally Restrained: Messages may appear to wander with the meaning being implied. Many Thais will avoid using the word “no.” Rejection may be expressed indirectly, such as by saying, “that is difficult.” Too much candor or honesty may be considered embarrassing and counterproductive. Nonverbal cues, such as facial expressions, body movements, gestures, pauses, and smiles are generally an intrinsic part of the message.

Thai people tend to avoid emotional displays, placing a higher importance on patience, humor, and “jai yen” (“cool heart”). Refraining from too much emotional expression is rooted in Buddhist teachings about detachment of the self from one’s emotions and the belief that emotional restraint preserves harmony. Overt displays of emotion may be seen as immature and can erode trust.

Formal: Thais use the “wai,” a traditional Thai greeting which consists of a slight bow with palms pressed together in prayer-like fashion. The higher the hands are held and the lower the bow, the more respect is being shown. The wai is traditionally observed upon formally entering or leaving someone’s home. “Waing” is an extremely important part of social behavior among Thais, who tend to be sensitive to their relative standing in the context of hierarchical Thai society. One should always return a wai that is offered as a sign of respect. However, visitors to Thailand should not wai someone younger than themselves first.

In Thai, the word “Khun” – the equivalent of Mr., Mrs., or Miss in English – is often used as a term of respect for nearly anyone. “Khun” precedes a Thai name to show respect for the person. 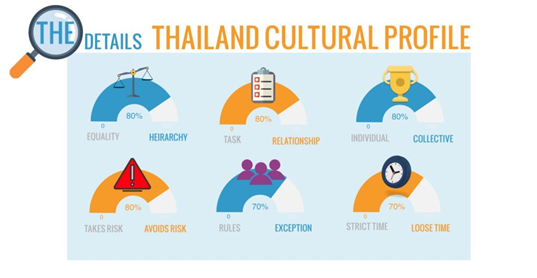 Want to learn more about an assignee’s day-to-day life in Thailand (or any other country)? Please contact your Aires representative.

As anyone who has completed an international assignment will tell you, each country has cultural differences and norms t...